World of Warcraft patch 3.0.2 has launched! Get the latest on the game at WoW Insider.
GameDaily

Most people only read reviews to find out if they should buy, try or avoid a particular game. With that in mind, here's that info on Metal Slug Anthology for those who don't want to read a full review.

Buy: If you are a Metal Slug fan or enjoy 2D shooters (ex. Contra).

Try: If you haven't played Metal Slug or a 2D shooter before, but enjoy action games.

Avoid: If you don't like dated graphics, 2D games or shooters.

Metal Slug model to drool over

Metal Slug fansite Metal Slug Database has put up this gorgeous looking Metal Slug model that fans of the series should certainly appreciate. It's a resin model kit and assembly and painting is needed, so if you did buy this, it's unlikely it'd look as good as the image above. It's unclear if the model is official or not, but it's officially awesome. If only the model came free with copies of Metal Slug Anthology for PSP, then it would be the ultimate collectors edition. Do any readers love Metal Slug still like myself?

What is up with SNK??? Metal Slug Anthology was supposed to come out last year, and ever since, it's been constantly pushed back. We said it was coming out in February, and now it appears it's been delayed ... again. amazon.com shows a March release, which has us questioning: how hard is it to port over decades-old games? SNK gets a big "boo" for their constant release date shuffling.

The Metal Slug Anthology is finally coming out next week on the PS2, Wii and PSP. Of course, there's really only one platform you'll want this on: the PSP. Handheld 2D carnage to go sounds like a blast, and this new trailer proves it. But with Metal Gear also coming out on the same day, PSP gamers will have a rough choice to make. (Of course, the best course of action would be to get both!)

Things blow up real good in this insanely awesome Metal Slug Collection trailer. You might notice the trailer is surprisingly gory, featuring "blood, blood and more blood." The trailer clocks in at over 5 minutes, making it quite an amazing montage of guns, explosions and gore: sounds like the perfect game for me. And because I love you guys, you can download a PSP formatted version here.

I don't think I can ever get bored of Metal Slug's super expressive and detailed sprites dying ultra-violent deaths, and this year's Tokyo Game Show kicking off today, Gamespot has uncovered a cache of new screens for us all to drool over.

Now, in case you don't already know, Metal Slug Anthology is a collection of six previous Metal Slug games. It is set to ship Nov. 7, 2006 and will support two-player wireless multi-player.

God, I love this franchise and to think we get six games in one really gets me excited.

Now that Ultimate Ghosts 'n Goblins has come and gone, it seems like I need a new lethally difficult 2D game to pine over. As previously revealed, the Metal Slug Collection will feature six Metal Slug games. IGN UK recently got some hands-on time with the game, and squealed in delight to see "blood, blood and more blood," as in the original Japanese release. (I wonder what the ESRB will have to say about that...) Although the game looks stunning on the PSP screen, the writer had a few concerns with the game. Firstly, it will be very short, considering how each game in the series clocks in at about an hour long. Although SNK is adding extras, they're limited to just concept art. Also, the load times seem unnecessarily long as of now (considering how this game isn't too technically advanced, the load times should be non-existant). Finally, the menu designs seem just slapped on together sloppily. Hopefully, SNK will fix these issues before the game releases in September.

The Metal Slug sprites have always been among the best in the business. There's so much expression in those hand-drawn hooligans that it's tough not to fall in love with the game purely on graphics alone. But the simple, yet highly addictive gameplay is what has kept my interest in the series.

IGN has just released a couple new screens of the game, which was previously known as Metal Slug Collection, and while they don't really show anything new, they do show more Metal Slug goodness, and that's always a good thing. 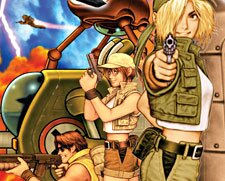 When one of our readers mentioned back in November of last year (after we asked the question of what titles our loyal patrons would like to see come out for the PSP) that he’d like to see the Metal Slug series make an appearance on our handheld, we had no idea it was going to happen for real. This week's GDC, the lone event responsible for setting off hype for the coming gaming year, was also the venue where SNK Playmore confirmed that the PSP would be receiving its own Metal Slug compilation series this November under the title Metal Slug Collection.

The collection will contain Metal Slug, Metal Slug 2, Metal Slug X, Metal Slug 3, Metal Slug 4, and Metal Slug 5 and will feature 2-player co-op play. Whether that’ll be over ad-hoc or via infrastructure mode, they’re not telling, although we’re guessing it’s the former.