Are you prepared for Wrath of the Lich King? WoW Insider has you covered!
GameDaily 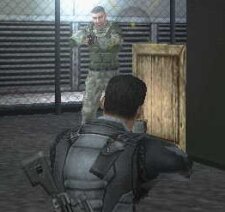 Syphon Filter hasn’t made a striking appearance on a console since, well, the first Syphon Filter came out on the PSOne back in 1999. Fans of the third-person shooter can breathe a sigh of relief then knowing that the newest addition to the franchise, Syphon Filter: Dark Mirror for the PSP, has made an equally large splash.

Excellent graphics, effective use of the PSP controls, and great online multiplayer mark Dark Mirror “the game to beat on the PSP” by IGN, and while 1UP has issues with the originality of the story (“The story…isn’t something to pay close attention to”), both they and GameSpot agree that the ability of the game to play well even without the help of a second analog stick is a blessing.

Gee; two great games and news of several landmark peripherals in the span of a week. Suddenly that feeling I had as a neglected PSP owner is feeling somewhat less soul-deadening.

nice:D:D now im only waiting for a final fantasy game (7 would be nice, an upgrade of it with nicer graphic) and baldurs gate would be nice on psp i think...:p

I had a lot of fun with the online portion of this game, and I thought the controls were the best I have used so far for FPS.

what ver. firmware will be needed this game?

Finally a kick a$$ fps for the psp. I'm sfe.
This is just what the psp needed right now. I was going to pick up Metroid Hunters this week but I think this might better satisfy my sootemup needs.

Actually it is a 3rd PS.

This games looks awesome. I played the beta and thought it was great. I'm picking it up today, but sadly, i'll have to give up my precisous 1.50 firmware. DAMN SONY!!!!!!! lol

Played the game. I think it is the best 3rd person PS game for the PSP right now. I will pick up Splinter Cell on Friday. Which one is better? My money is on Syphon Filter but we shall see.

i got this game and I have been playing it for quite some time now. When I first got my PSP i got GTA with it, GTA didn't leave the PSP for awhile. Now Its syphon filters turn!! I put ti in and it hasn't came out for a month!!! This game is prob the best shooter out for PSP. Online is a blast as well

ive only 3 hrs sleep everyday just playing this game.is the bomb!hopefully they make another sf game just fit for the psp with more locations.good guys of making it!