Are you prepared for Wrath of the Lich King? WoW Insider has you covered!
GameDaily
Posts with tag peripheral

There aren't usually a lot of devices who can follow through on their claim that they can 'do it all'. Sure, being able to vacuum and cook up a delicious waffle is interesting, but then your carpet smells like a waffle, too. This is why we're pretty interested in the potential of this new PSP charger stand -- it does it all!

While your PSP charges on the stand, you can listen to music and even play stuff on your TV. It comes with built-in headphone jacks and multi-card slots. It's essentially got all the functionality of a non-charging PSP, and it's just under $17. If you're looking for a charging solution, this might be your cup of tea.

Deal of the Day: 20% off PSP accessories

PSP has more than enough accessories: from speakers, to cases, to wifi adaptors, and more. Well, now's your chance to go on a shopping spree. CompUSA is having a 20% sale on all PSP accessories. Sale ends tomorrow, so if you want to take advantage of these deals, you'll have to act pretty quickly.

GPS sells out in Japan

Japan is certainly excited for the new GPS peripheral. amazon.co.jp is reporting that its first shipment for the device is already sold out. The customers that are buying the tool are also buying Metal Gear Solid: Portable Ops, most likely because the Kojima stealth game happens to support the device. They're also picking up Chotto Shot (the PSP camera), because as you know, once you start buying peripherals for a system, you want to buy them all. The hardcore Japanese PSP fans appreciate the PSP's Swiss Army knife-like functionality... how about you? Will you be picking up the GPS system when it comes out?

A German video-game news site is reporting Sony has finally released some solid information about its two upcoming PSP peripherals - the camera and GPS add-on.

According to the site, the PSP camera will be released in Japan Nov. 2 for 5,000 Yen (roughly $43) and will have 480x272 resolution for videos and 640x480 resolution for photos. In addition, it will be able to record 15 seconds of video and will be bundled with Chotto Shot photo software.

The GPS add-on will be released in Japan Dec. 7 for 6000 Yen (about $51) and will include Navigation software. Also, it the following games will have GPS support: Metal Gear Solid Portable Ops, HomeStar Portable, and Everybody's Golf.

Still no word on a North American release date. Schucks.

[Thanks daniel-kun! Via Evil Avatar]

[Update 1, from Andrew, because he loves you. New, shinier pictures attached. Stolen from Joystiq]

Keyboard coming Spring according to contest

One of the features that fans have been clamoring for on the PSP has been keyboard support. While we've seen one potential keyboard accessory die, it appears that another one is coming down the horizon. At least, according to a new contest sponsored by FITC and Silver Platter. The contest asks for talented coders to make a Flash application that'll utilize the keyboard. Winners will win UMDs from Silver Platter, PlayGear headphones and PlayGear cases. The first prize winner will get tickets to FITC Hollywood and also have their application packaged with the keyboard, coming this spring.

The contest ends September 21st, so coders should get moving quickly. Hopefully, we'll find out more information about this peripheral soon enough.

Intec Dock charges when it cradles

Posted Feb 24th 2006 9:00AM by Rafael Espiritu
Filed under: Peripherals

Is your PSP getting all scratched up and dirty sitting there on your table while it charges? Well, suffer no more, Mister Limpy! For a measly ten bucks you can pick yourself up this super neato charging cradle that'll...oh, there's no fooling you! Yes, folks, it'll charge your PSP while it sits on this molded plastic frame! Wow, I think I just soiled myself.

Sure, you could make one for cheaper, but just how much nursery-level stacking are you willing to go through for ten George Washingtons? 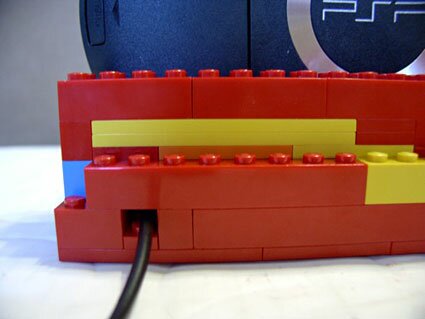 Usually, creative stuff like this is borne out of either genius or boredom, but we're willing to bet that this originated from pure cheapness*. Snarky though I may be, this PSP charging dock made entirely out of LEGO bricks is still a cool piece of work. And, like its creator says, you can stand to save quite a bit of green too. At six bucks, it's about freakin' time we got a little somethin' somethin' back in the bargain range for investing in our widescreened inamorato. 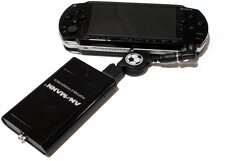 The Ansmann Portable Power Pack isn't necessarily made just for the PSP. In fact, it'll charge pretty much anything you've got so long as it has a USB charge port, which gives it a slight advantage over the other well-reviewed charger we featured before. At 50 bones, this Li-Ion battery pack will grant you 10 more hours of juice and looks to be a great buy for anyone looking to get their gaming on for those cross-country road trips or international flights, although we'd have to mention our reservations at the resulting dialogue with having to stick this squarish peripheral in your pocket during transport ("Is that a portable power pack in your pocket..." Oh, never mind.)

Pigs fly! Get eight hours of play on a PSP!

The peripheral train just keeps on chugging. PSP411 has a review of the Power Bank 3 battery pack, a neato add-on that extends your PSPs battery life (according to another review by IGN) by a whopping eight hours. Wow, that’s a lot of repeats of that Stealth movie…if you like films that smell like garbage.

The Power Bank 3 piggybacks onto your PSP and adds about a half-inch of thickness, which isn’t a big deal but nonetheless makes the console a little harder to take on trips with you (imagine stuffing that thing in your back pocket). The pack can be set to use either the PSPs default power supply or the peripheral’s 4400 mAh battery. It retails for about $60.

This looks to be one of the sweetest peripherals to show up for the PSP in a while. I wasn’t that partial to Datel’s 4GB HDD, mostly because of its strange shape and sluggish access times, but it was better than not getting one at all. Here’s a question for you: What PSP peripheral do you use the most?