Get the latest Age of Conan news and views at Massively!
Posts with tag dealoftheday

Online retailer amazon.com is offering the PSP-exclusive prequel to Final Fantasy VII for only $26 -- that's $14 off its standard price. This limited time deal won't last long, so those that missed out on this adventure may want to jump on this deal.

Korean rhythm game fans are going to love this. Both Pump It Up EXCEED Portable and Pump It Up Zero Portable are available at import retailer Play-Asia this week for only $20. Imports rarely come cheap, so getting two games for such an incredibly low price is a deal we simply can't refuse.

For the unfamiliar, the Pump It Up series is a popular music game, similar to Bemani's DDR series. Arrows go towards the top of the screen, and the player must hit the buttons in tandem with the music. Although, we're wondering: could this handheld game possibly be as fun as the arcade originals?

Crush gets smashed to $15

Unfortunately, the incredibly innovative 2D/3D PSP-exclusive puzzle game Crush never met the sales it quite deserved. That's a shame, because we really enjoyed the detailed graphics, the quirky story, the impeccable presentation ... and most importantly, the gameplay.

Check out our review, and some videos of the game in action. If you haven't checked out Crush yet, maybe this $15 deal on amazon.com will convince you to pick up one of the most original PSP exclusives ever. 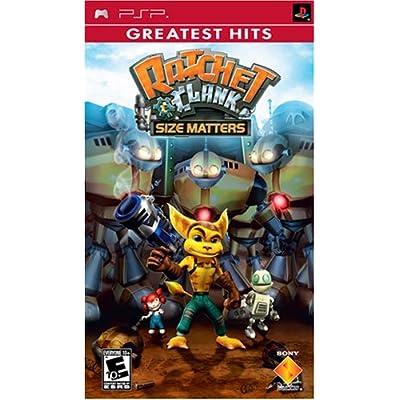 Get ready for the release of Secret Agent Clank by playing the first PSP Ratchet game, Size Matters. High Impact did an incredible job of recreating the classic Ratchet gameplay on the handheld. Watch for the space missions: they're still some of the prettiest levels created for any PSP game to date.

There are a number of great PSP deals at video game retailers this week. Check it out:
[Via CAG]

Deal of the Morning: Jeanne D'Arc for $20

If you want to grab one of the best SRPG's available on the PSP, Level 5's Jeanne D'Arc is the ticket. It's accessible for new gamers but deep enough to interest veterans. Of course, the game itself has started to become harder to find, but only slightly. The price, therefore, hasn't really decreased in many areas. Enter Amazon with their special deal: $20 for the game, brand-spankin'-new. It's entirely worth it, so take advantage while this deal lasts!

GTA PSP titles selling at $15 each on Amazon

What better way is there to anticipate the upcoming release of Grand Theft Auto IV for the PS3 than by playing through the two portable adventures on PSP in preparation? Now you have no excuse, because Amazon are selling both Liberty City Stories and Vice City Stories for fifteen bucks a pop. Two great PSP games for $30 is a great deal, so go ahead and take advantage. Beware though, you've got less than a week before GTAIV -- good luck completing both games before then.

Deal of the Day: After Burner drops to $11

Many people ignored this PSP-exclusive rails shooter. After Burner earned decent marks from the critics (a 73 average on Metacritic). While it may not have been worth the original $30 asking price, it's more than worth its current discounted price: $11 at amazon.com. We can buy sandwiches more expensive than that price.

Deal of the Night: Disgaea for $30

If you haven't gotten tired of Nippon Ichi Software's staple Disgaea series by now, chances are you haven't played it yet. This must be remedied. amazon.com is having a sale, discounting the game to $30. Of course, getting it used from the Amazon marketplace can save you a couple of bucks, but you won't get the free shipping. However, it appears that this reprint will take about a year to release.

Capcom has been a great supporter of PSP in the past, and Circuit City is finally putting their games on clearance. Supplies of these games have been fluctuating online, so it might be best to check if your local retailer carries these titles:
[Via CAG]

Well, it took a while, but it's finally happened. 8GB Memory Sticks are now in the realm of the possible-to-attain. For example, this 8GB Memory Stick from FRYS.com is only $65, plus shipping. Remember when these babies used to go for over $100?

We think the 4GB Memory Stick is plenty enough, but a whopping 8GB would allow us to store even more music, videos and games from the PLAYSTATION Store. We like the sound of that. Even Sony's official 8GB cards are getting cheaper -- we spotted one for $90 on amazon.com. Now, the next thing we're eying: the 16GB Memory Stick. How long before that becomes a bargain purchase?

The price of the Lexar 4GB Memory Stick continues to plummet. For those cheapstakes out there (that includes us), FRYS.com is offering this 4GB card for $30. Considering you can now download PS1 games, full PSP games and more on the PLAYSTATION Store, it seems like most everyone will want to upgrade. We're quite pleased with the amount of music, videos and demos the 4GB card can hold (although we're keeping an eye out on the 8GB Memory Stick!).

Go to FRYS.com to take advantage of this great deal.

This M-rated PSP-exclusive action game is now available for only $15 at amazon.com and GameStop. Most likely, the game's rather subdued release caused it go under most everyone's radar. It's a game that's filled with personality, even if the gameplay isn't as refined as we'd like. As a daring experiment for PSP, this may be worth your while, especially at such a low price.

Get 25% used PSP games and movies at GameStop

PSP owners are always on the look-out for some deals. Check out this new coupon from GameStop, which will give you a whopping 25% off used game and movie prices at GameStop. (If you have an Edge card, you get 35% off.) We're sure you can find plenty of games for under $20, and whatever UMD movies are still in stock at GameStop will probably be cheaper than toilet paper. All in all, a good deal.

The coupon expires at the end of the month.

Ready to download some games to your PSP? The PC-based PS Store is open for business, and reader Matt G. noticed the virtual marketplace's first price drops
Wipeout Pure is a great deal at that price, especially for those of you that are a bit too broke to afford next month's Wipeout Pulse. And remember, no matter what -- stay away from Gangs of London.