Deal of the day: Infected for $10 at Circuit City

Call me what you will, but I'm a huge Majesco freak. The company released some amazing games on the Xbox, namely Advent Rising and Phantom Dust. Well, the company has recently fallen on hard times and has shifted focus to publishing value and handheld software.

And now you can get one of Majesco's first PSP games, Infected, for only $10 at Circuit City. The game has scored a 75 at Metacritic, which ain't too shabby.

Hurry up because this game will most likely sell out quick!

Seether's Shaun Morgan loves getting Infected on his PSP

Earlier, we told you about Seether's PSP love: they were offering downloadable content to your PSP and a contest to win a custom PSP, loaded with all sorts of Seether goodness. The Hollywood Bite found some time to talk to Shaun Morgan, lead singer and guitarist of Seether. When speaking of the PSP, he had this to say: "All of my friends have PSPs... We can sit around and play games on them. Those are powerful little machines. There are so many out there. If you provide downloadable content that's free, people will probably find it sooner or later."

Surprisingly, the band's favorite game is the generally well-received PSP-exclusive Infected. While he loves his PSP, Shaun isn't afraid to take a pretty non-fanboy-ish stance in the world of gaming and get a DS Lite in addition to keeping his PSP. "I'm going to get a Nintendo DS Lite because I love those Japanese games, which tend to be more bizarre and freaky," said Shaun. "They have those new train-your-brain things. I'm really into games that challenge you. Brain Age Academy. I'm 27. I feel like it's necessary at my age. If I can find a game that can teach me something, that's even better. They seem to have come a long way with the technology of the Nintendo DS Lite."

The article ends with Shaun's hope for more music to video game tie-ins. "You've reached someone who might not have heard of your band, because they only watch MTV. This is a great way for rock bands that don't have a place on the TV channels." 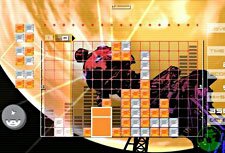 We don't know what their criteria was, but we're still mighty happy to note that several PSP games have been nominated for 1UP's yearly Best Of awards, which is great especially when made in comparison to the so-far smallish list of must-have games for the system. The nominees are as follows:

Annoyingly (but perhaps appropriately), four of the five nominees for Best Puzzle of 2005 are on the Nintendo DS. Still, we think Lumines has a good shot to win, since there's always a chance the DS vote will end up getting divided among the entrants.

Readers get to appoint who wins the whole enchilada in each category, so make sure to head over to their site and put one down for the best portable this year (the PSP, silly; what did you think this was, DS Fanboy?)