Are you prepared for Wrath of the Lich King? WoW Insider has you covered!
GameDaily

Joystiq's Jared Rea loves the Korean import music game DJ Max Portable, calling it "the best handheld game ever". We were both colored quite surprised when we found the game on the GDC show floor: was it a confirmation of an impending US release? Certainly, the gameplay is accessible, regardless of language. Heck, the game has always been in English. A Sony representative wasn't able to confirm a US release, saying they simply "haven't announced anything yet." Watch this video of Jared's expert play. I have to say I was quite impressed, as were the dozens of people that stopped behind us to watch. DJ Max Portable will be available for importers by the end of the month.

There's a new trailer for DJ Max Portable 2, and you can get more out of it than just looking at the pretty pictures and listening to the nice music. The trailer goes over some of the game features as well as some new and returning songs.

It's Saturday night and my PSP needs to look sexy for its night out on the town. Looks like this calls for the Saturday PSP background explosion. We're back this week with a background for an ARPG, a music game and an anime. Want to know what the backgrounds are?

While you're waiting for today's edition of PSP Fanboy Theatre to arrive, get your PSP's wi-fi revved up and check out these awesome tunes from the upcoming import music game, DJ Max Portable 2. To download from your PSP, head over to m.pspfanboy.com and download the tracks from Ruriweb.

For the rest of you, don't forget to check out videos from the first game (now available in English!). DJ Max Portable 2 will hit Korea in either February or March.

Some of you have figured out that I like music games... a lot. So, when Ruliweb reports that import-favorite DJ Max Portable is getting a sequel, I have no choice but to pass it on to all of you. The sequel ups the ante by introducing one more gameplay mode, and by expanding the soundtrack to 150 songs. Wow. There's no word if the sequel will get the English language treatment like its predecessor, but I'm hoping.

The PSP is no stranger to some excellent music games. Unfortunately for us English-speaking blokes, these games rarely get translated into a language that we can read. Ruliweb has discovered a new version of the Beatmania-clone DJ Max Portable. The International Edition of the game features English language text and one new song that can't be found in the original ("River Flow" by Planetboom).

No hardcore PSP fan will be caught without DJ Max Portable. Now that it's in English, there really is no excuse not to have it.

DS Fanboy discovered a great list of the top 10 handheld imports from Modojo. While the list features many DS and GBA games, the PSP also shows up a surprising number of times.

10. Tokimeki Memorial: Forever With You
Part of the huge dating game sim genre in Japan, this game has you trying to improve your sex appeal. If you're good enough, you might get lucky. Don't expect any naughty bits in this game though. That's for some other games.

7. Taiko no Tatsujin Portable
Taiko Drum Master was released on the PS2 to some fanfare, and the PSP version is essentially a remake... without the drums. While it seems like a lot of the appeal disappears without Drumcon, the soundtrack's happy J-Pop and Katamari Damacy tunes make this a hit for importers.

2. DJ Max Portable
Called "the single best game on the PSP" by the folks at Modojo, and for good reason too. Essentially Beatmania squeezed into handheld form, the game has you furiously mashing the PSP's buttons to the beat of the music. Harder difficulties apparently make you seem "less of a man." Wow.

Of course, these kind of lists require some kind of fanfare. See a video of DJ Max Portable after the cut. 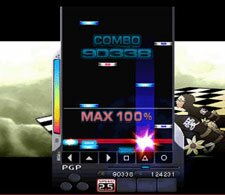 I had my doubts with rhythm games that involved nothing but button presses, but after seeing the concept work for games like PaRappa the Rapper and the Bust a Groove series, it was then I realized I had to shut up and let game developers do whatever stupid thing they wanted with their games. After all, we can never have too many titles like Irritating Stick around.

Either way, Korean developer Pentavision has come up with their own Beatmania knock-off in the form of DJ Max Portable. The game mechanic remains essentially the same: bars fall from the top of the screen, and your job is to hit particular buttons in time to the rhythm of the game, hence it being called a rhythm game.