Slim Down for Summer with That's Fit
GameDaily

The early reviews for Namco's PSP-exclusive flight game are in, and they're good! The critics have unanimously applauded the game's graphics, sound, music, depth and controls. With such care placed into games like Tekken: Dark Resurrection and the original Ridge Racer, it appears that Namco is quickly becoming the PSP's leading publisher. Let's see what the critics had to say:
I didn't plan on picking up Ace Combat X, but after all the great reviews, I think I may reconsider. The game is now available in stores.

IGN has a new promo write-up about some of the new locations to be found in the upcoming PSP-exclusive Ace Combat X: Skies of Deception. But, thankfully, for those of us that can't read, they've included some new screenshots and the game's intro as well. The game's looking real pretty, but that seems to be a requirement for all PSP games these days. The game comes out on October 23rd, so expect more coverage soon.

I'd like to end your evening with absolutely terrifying footage from GameVideos. These McDonald's ads from the PS1 era feature your favorite Ape Escape and PaRappa characters, dancing and singing. AND EVERYTHING IS SO HAPPY!!! Maybe Sony isn't as "t3h m4tur3!!!1" as we thought it was.

Ace Combat fans will be excited by the new (highly promotional) preview of the upcoming PSP-exclusive Ace Combat X on IGN. They reveal some of the features, such as the Medal System, Color Variation and Free Mission. The mini games listed include Touch and Go, Mid-Air Refueling Practice and Carrier Touch & Go. While it doesn't sound too exciting to me, I'm sure those of you that were fascinated by planes will be absolutely enthralled.

If you don't really feel like reading about these features, IGN has also posted two new trailers of the game in motion. Graphically, it looks impressive, but it seems like that's a given for most PSP games these days. The game comes out in October.

For the non-believers, this is a demo reel (note: no sound) showcasing some of the hot new titles coming to the PSP soon. You'll see the Ape Escape Racer, Jeanne d'Arc, the new Talkman, PaRappa the Rapper, Ratchet and Clank, Ace Combat X, Gundam Battle Royale, Tales of the World, Boxer's Road 2, Monster Hunter Portable 2, and more.

It's clear that the games library is maturing quite a bit on the handheld. I'm really impressed by how far the handheld has gone graphically, and that's with the CPU clock still limited 33%. A lot of these games look like winners, too. I'm really psyched for Jeanne d'Arc and Tales of the World. Ratchet and Clank looks absolutely beautiful too.

With E3 seemingly now a shadow of its former self, the gaming industry's focus may shift to the Tokyo Game Show, which just so happens to be only a mere seven days away. TGS 2006 goes from Sept. 22 through 24 at Makuhari Messe in Chiba, Japan. And to whet your appetite, Sony has released a preliminary list of the PSP lineup that should be in playable form at the event.
(* – supports GPS)

In addition the already mentioned games, Sony will show new video of 35 more titles. I believe the big story here is how effectively the GPS games use the add-on. If Sony can get software that show the peripheral is more than a gimmick, the PSP may be able to gain some ground on the DS.

Famitsu has beautiful new screens of Ace Combat X, an all-new continuation of the Ace Combat series. Famitsu also grabbed a trailer, which is voiced in English so you can fully appreciate the cheese. The graphics are sharp, and features some potentially awesome multiplayer. Makes me want to watch Top Gun again. Wait... I never want to watch that movie ever again. The game comes out September 17th.

[Update 1: Trailer is now embedded after the cut, for your viewing pleasure.] 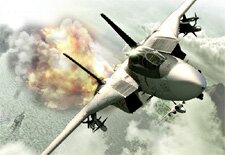 A press release sent out today from Namco Bandai revealed a veritable motherlode of details for their upcoming Ace Combat game for the PSP. Referred to under the working title Ace Combat X: Skies of Deception, the flight sim-ish game will feature wireless ad-hoc multiplayer hookups, an all-new storyline, strategic AI (your actions determine your objectives), and the ability to tune your own planes with parts unlocked during Campaign mode. Aircraft nerds can rejoice in the knowledge that licensed planes like the F-14D and the Tornado F3 will make an appearance in the game when it lands on store shelves this Fall 2006. Check out our brief coverage of the game here. 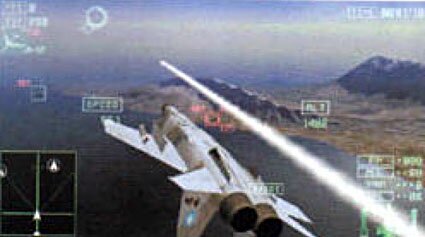 Jonesing for some portable flight sim-esque portable action? Curious what magazine scans look like when they're done really badly? Then get your fill of these screens from Famitsu for the upcoming title Ace Combat X on PSP. Eye-catching!