Go back to school with your Mac, iPhone and TUAW
GameDaily 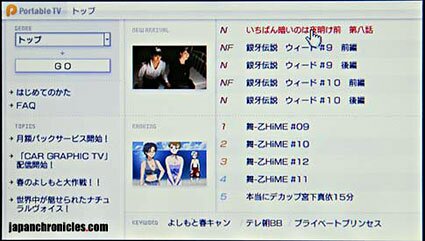 Tech site Arstechnica took a long hard look at Sony's Portable TV service in Japan and appears to have walked away with a slight case of pinkeye. In their assessment, they didn't warm up to the site's "rather draconian digital rights management scheme" that only let users rent video clips and hold on to them for a set period of time. In addition, the site's offering of clips from genres like drama, sports, comedy, and anime is somewhat limited with prices for videos pegged at somewhere around $1 to $2 (although some are made available for free), but Arstechnica thinks that the meager selection is the least of the service's problems.

Portable TV has shades of Sony's barely-there Connect music download service, which so far has not even come close to competing with services like iTunes. We liked the idea of getting video downloads for our PSPs when we first heard about Portable TV, but we'd rather Sony streamline their system before they start thinking about giving the US or Europe the same offering.

Read up on other reviews of Portable TV here.

" Sony streamline their system before they start thinking about giving the US or Europe the same offering."
Yes, exactly, Sony should understand that the Japanese market is completely different than USA or Europe. Howver, I think that Portable TV great potential for the future.

their Location Free product works with PSP now so this would seem the better way to get streamed content? provided you already have it on your pvr or want to watch live tv that is...