You guys guessed it! The new Star Trek game on PSP didn't fare too well at all. The series certainly looks like it's on its dying breath: no new movie, no new television series, and no good games. Let's find out why the critics disliked Bethesda's offering for the franchise:

In the wake of Bethesda's Oblivion heading to the PSP next year, poor old Star Trek: Tactical Assault seems to have been lost in the shuffle. At least it has to most of us gamers, but I'm sure it hasn't to you Trekkies out there.

Well, to said Trekkies, I'm sure you'll be eager to hear Bethesda has just released about a dozen new Tactical Assault screens.

Trekkies, it's time to rejoice, because I bring you good tidings. Longtime Star Trek TV writer Dorothy "DC" Fontana has been tasked with writing the script for the PSP and Nintendo DS version of Star Trek: Tactical Assault. Tactical Assault is being developed by Bethesda Softworks, which may only add more fuel to the fire to the recent Oblivion PSP port.

As the name suggests, the game is a space-based, tactical-strategy game set in the original Star Trek universe, and players will have the choice of commanding a Starfleet or Kingon commander in real-time ship combat with branching missions. Tactical Assault, which should be out by year's end, will also support wireless multiplayer.

I'll admit, I'm not big into the Star Trek universe. I remember renting all of the movies as a wee lad. I had a great idea that I'd have a Star Trek marathon that weekend which would rival any that came before it. But instead, I couldn't get through about 15 minutes of Wrath of Khan. I think I'll stick with Star Wars. 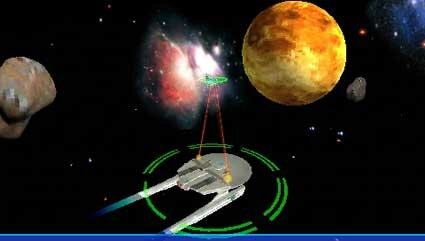 Two weeks ago, Bethesda announced the development of a new Star Trek game for the PSP (as well as other consoles). The news came out-of-the-blue and was quite a surprise across the industry.

Gamecloud has conducted an interesting interview with Bethesda regarding the deal, the games themselves and how they are being created.

"We feel like it’s a great license for video games that has never reached its full potential, and we think we know how to take a Star Trek game to the next level. We’ve got what we think are good ideas to use the license in a way that fits both the license and the kind of games generally that people expect and want to play, plus talented people to implement those ideas. It also allows us to move into some genres and platforms we haven’t gone after to date so it felt like something we really wanted to do."

You can read the full interview here.