There may not be much PSP related news out of GDC yet, but you can comfort yourself by knowing the system has lots of great games already. With that in mind, every day this week we'll feature a new genre and list the top 5 games (according to metareviews), so no matter what you're into, you'll have some idea of what games you should own. Today the focus is on strategy games, which the PSP doesn't have a lot of, but there are some notable and enjoyable ones (like the games on the list below).

I know many gamers hated the Metal Gear Ac!d series, but they are some of my personal favorite games on the system. Actually, I enjoyed all the games on this list, except for Pirates!, only because I have yet to try it. But what do you think about these 5 games? What strategy games aren't on this list that you think every PSP owner should have?

If you missed it, you can check out our previous top 5 game lists:

Is Sony’s upcoming strategy game Field Commander delayed till April? Robert of the A Gamer’s Life weblog wrote in and essentially told us a little birdie (one that strangely looked like a preview event) told him that the title, which was originally slated for a Q1 2006 or late March release, would instead be pushed back to April 24. Then the birdie told everyone to leave the premises while it bussed its own tables. Yeah, we’re really making sense now.

There’s no official word from Sony at this point, so we’ll have to assume this is a rumor until they tell us otherwise. Still, a delay of a month isn’t that bad. Duke Nukem Forever this ain’t.

The PSP is going to see some action in early '06 with Ubisoft confirming a number of games slated for the handheld console. Brothers in Arms will be making an appearance, but no word on whether it will be just another port of Road to Hill 30 or Earned in Blood. Hopefully we might see a brand new installment of the series. Other games include Street Riders (187 Ride or Die), Untold Legends 2, Field Commander, and Tales of Eternia. 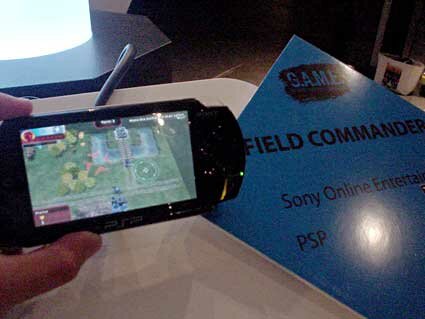 GameSpot held their much publicized event, called the Games and Music Experience, over the weekend in San Francisco. Billed as a mini-E3 by some, the three-day show featured not just the usual game kiosks and random smattering of tight-shirted promo girls (and one cosplayer sighting on Saturday night), but also DJs, bands, hip-hop acts, and an appearance by the site's editors, who entertained attendees with B-list celebrity interviews and Guitar Hero matches.

As expected, Sony's PSP was present at the event's Games On The Go section to show off a range of titles, although the games on display were less spectacular than anticipated. But while most have already been widely available in the market for some time now, a few titles set for release in 2006 did make an appearance, namely SOE's Field Commander, Untold Legends: The Warrior's Code, and Namco's Bounty Hounds.

Just across the way was a rather large booth from Nokia for their N-Gage, which was surprising considering they had already admitted they would stop creating new versions of the gaming phone and redirect their attention from mobile gaming to music and television. Can't say we blame them for trying to eke out one last hurrah, though.

[UPDATE:] Joystiq has a report from a disgruntled gamer about the event here.

Ubisoft to EA: "We're not for sale"

Yes, but they're not exactly closing the book on the idea either. Last December, EA bought a 20% stake in Ubisoft, a move that raised many an eyebrow and brought about rousing commentary on EA's continuing bid for world domination. This time it appears that Ubisoft's made a determined stand on remaining independent, although they've been quoted saying, "If a company offers a strategy and a price satisfactory for staff and shareholders, we will look at it." In other words: If the price is right, we're going whole hog with the merger.

This bit of news shouldn't affect last week's announcement regarding Ubisoft's deal with Sony to publish two new titles for the PSP: Field Commander and Untold Legends: The Warrior's Code. Although it's entirely possible that at some future date we may see EA's ubiquitous company ID mocking us from the game box of Prince of Persia: We Sold Out to the Highest Bidder.