It's been a while since we wrote anything about Exit. Then, we saw this video and it changed our lives. This puzzle game from Taito has you safely escorting people out of a burning building -- but you wouldn't know that considering how truly zany and wacky this video is. Maybe it's not the most PSP-related story out there, but it's certainly the most entertaining today. Enjoy!

IGN is reporting that Exit will be making the leap from small screen to big screen. No, it's not getting a movie made of it, but it is becoming an Xbox Live Arcade title. For those who haven't played Exit, it has you take control of Mr. ESC as he guides civilians from burning buildings, and other deadly situations. The Xbox 360 version will also feature new levels not found in the PSP title. There is no word on whether the XBLA Exit will be a port of the first game, it's sequel, or a mixture of both. For those interested, it will retail for $10, and be out in Japan this summer.

Lumines previously made the jump from PSP to Xbox 360, so this move isn't unprecedented. This just goes to show that the PSP isn't the only system getting another console's ports.

The first Exit was a cult puzzler that gained a small, but rabid fanbase. The sequel, Kangaeru Exit, was released in Japan many months ago. Although we were treated to a demo of the game, the language barrier proved to be too challenging to overcome for most players.

Now, 505 Games is quietly publishing the game in Europe. Once again, Joel has provided a thorough insight into the game, noting how it's changed from the original. It appears the changes in the sequel are minimal at best:
Although it appears as though the sequel is simply more of the same, fans of the original will most likely not complain. With tons of downloadable content already available for the game, we can only hope that this English language version will cross the Atlantic and hit the US in the future. For more pictures, see Joel's Flickr stream.

The PSP has plenty of owners, but some claim it doesn't have many great games. With that in mind, every day this week we'll feature a new genre and list the top 5 games (according to metareviews), so no matter what you're into, you'll have some idea of what games you should own. Today the focus is on puzzle games, which the PSP first became known for. But there's more good puzzle games than just Lumines.

What makes the puzzle games on the PSP so unique is how they are audio/video showcases, which seems odd when you consider how puzzle games used to be. Of course, these 5 games are enjoyable to play as well, which is what really counts. Though I am suprised there weren't even more Q? Entertainment titles in the top 5. But what do you think about these 5 games? What puzzle games aren't on this list that you think every PSP owner should have?

If you missed it, you can check out our previous top 5 game lists:

It's Saturday PSP Backgrounds Live! Want to be a background whore like me, but don't want to put in the effort? That's why I'm here every Saturday to give PSP Fanboy readers new backgrounds. This week we have a background about super powered aliens, one that features a savior of men and another that takes the lives of men. And one of them is our first fan made background! You know you want one of these on your PSP!

Did you snag Kangaeru Exit when it was available for cheap? Hope so, because on November 24th, 150 new stages will be made available for download. That's a lot of gameplay for free. The levels are designed by aspiring game programming students at various universities around Japan, making this project one of the coolest school assignments I've ever heard of.

Deal of the Day: Kangaeru Exit only $13

Did you like the Exit 2 downloadable demo? If you did, you may want to pick up the import version of the game. Entitled Kangaeru Exit, the game is now available for only $13, plus shipping, at Play-Asia. You don't really need to know the language to play this game, and it hasn't been announced for US release. Considering how the game will certainly cost a lot more if it ever comes out in the States, you may want to jump on this deal now.

There's a lot of demos coming out today. The first of the bunch is Kangaeru Exit, the sequel to the PSP puzzler, Exit. The game's not announced for US release right now, so this may be the only way you'll be able to play through this game, lest you import it.

1. Download the demo ZIP file.
2. Extract the contents of the ZIP file.
3. Connect your PSP to your computer using a USB cable.
4. Go to the PSP/GAME folder.
5. Copy ULJM05161 folder into the GAME directory.

[Thanks, dave! Via PlayStation]

PSP exclusives don't seem to stay exclusive for very long. It makes sense for games like Mercury Meltdown to head over to the PlayStation 2, considering how similar the hardware of these systems are. However, Exit seems to be making a far stranger move: to the cell phone. (It's not the first game to make the jump: remember Lumines for the cell phone?) With games like Final Fantasy VII: Dirge of Cerberus: Lost Episode coming to the States, there may be a chance that other 3D-intensive cell phone games like Exit might make it over here.

Think more in the 2nd Exit

The first Exit for the PSP was a solid puzzle game, earning an average score of 77 from Metacritic. You starred as the stoic hero Mr. Exit, and it was your job to rescue people from hazardous situations. Although the original featured a ton of levels (and even more free downloadable ones), it appears that the fine people of Taito are ready to put Mr. Exit back to the test in Kangaeru Exit, or the "Thinking Exit." The sequel doesn't appear to be too different from the original, but as is expected of a game with the word "thinking" in the title, this iteration of the series will be less action-oriented and more puzzle oriented. The game will feature over 100 levels, and like before, feature downloadable content that'll extend the game's life. If only more games took advantage of that feature on the PSP...

Importers can get ready to get their credit cards ready in less than a week. A US version is currently not planned.

Exit announced for US, Europe; reviewed

Exit, whose entry into the Japanese market we noted previously, has been announced for the US and Europe markets as well. Ubisoft has gained the publishing rights to the title from Taito and will be releasing the puzzler in both the US and Europe this February 2006. Ubisoft has also secured the rights to two other games from Taito's library, although what these games are haven't been revealed.

While the game won't see our shores for another two months, PSP411 already has a review up of the game. They've scored it pretty favorably, their only quibble being the time that has to be put into learning the controls, but otherwise the cell-shaded 2D game is fun and addicting. Sounds like we may have another winner on our hands, and hopefully will be the watershed of our gaming predictions for the PSP in 2006. 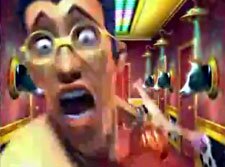 It seems Exit has left the building...or factory, we should say, and has started its distribution run across the robot and ninja-inhabited landscape of Japan. The official site for Taito's puzzler is also live and apparently already offering the first of several downloadable packs, which suggests extended playability for the visually-lauded title.

A hands-on playtest by GameSpot at TGS revealed that the game lets you assume the role of a rescuer who aids building tenants to safety by successfully navigating a series of firetraps and hazards. The trailer for the game implies slightly differently, however, since it mostly deals with what seems to be a groin-cupping, cheating husband about to get the beatdown from his raging spouse. It's funny, though; and weird, although that wouldn't be the first time we've ever used both to describe something that's come from Japan's gaming industry.

There are no active plans to bring the game to the US or Europe, but we'd be lying if we said we weren't plenty interested in seeing it come over.